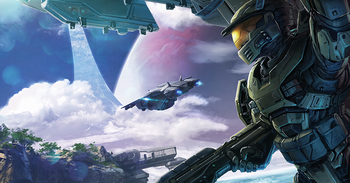 "Thought I'd try shooting my way out. Mix things up a little."
— The Master Chief, summarizing the series in Halo 3
Advertisement:

Halo is a Space Opera and Military Science Fiction franchise that began life as an Xbox exclusive First-Person Shooter created by Bungie Studios and published by Xbox Game Studios. It has since blossomed into multiple sequels, Gaiden Games, a substantial Expanded Universe, and the centerpiece of Xbox Game Studios.

In the 26th century, Earth and its colonies are at war with an alien theocracy known as the Covenant, whose leaders have declared humanity an affront to their gods. While the United Nations Space Command is vastly outmatched by the Covenant's superior numbers and Forerunner-based technology, mankind has one advantage: the SPARTAN-II Super Soldier program.

The Spartans, clad in Powered Armor and led by Master Chief Petty Officer John-117, are unmatched as warriors, but even they are not invincible, and by the start of the first game the Chief is The Last of His Kind. Over the course of the series, he and Cortana, his A.I. sidekick, battle the Covenant and discover the "Halos": massive Forerunner Ring Worlds hiding immense power.

Of course, Bungie took advantage of these unique gameplay quirks to stage intense and frantic battles, increasing the emphasis on having the right guns, using all your attacks and knowing when to retreat and recharge your shields. The gameplay style is both twitchy and cerebral, with room for the guns-blazing approach and significant tactical depth. The style has been preserved, with only a few tweaks for the sequels (Dual Wielding, new or rebalanced weapons, new vehicles, some power-ups, etc) throughout the franchise... not to mention nearly every modern shooter since. "Seinfeld" Is Unfunny, of course, but the fact that so much of it seems like a Cliché Storm gives you an idea of just how influential this franchise has been.

The plot is also fairly complex and sometimes combines with the gameplay to require you to engage in atypical combat. The music and voice acting are nothing to sneer at either. What has made the series so long-lasting is the multiplayer component; starting with Halo 2, the game connected through Xbox Live and brought to Console FPS the kind of multiplayer experience which previously only really existed on Windows-based personal computers.

The game also inspired the term "Halo Killer". Fans of the series joke that the only game to be a Halo Killer was Halo itself.

Reach was Bungie's last Halo project, with all subsequent works in the franchise managed by Xbox Game Studios subsidiary 343 Industries. There are also several novels and various other media that make up the Expanded Universe.

Halo General
Halo Books
Halo Games
"Oh. And your poet Eliot got it all wrong. This is the way the world ends."
Feedback