Music / Peter and the Wolf 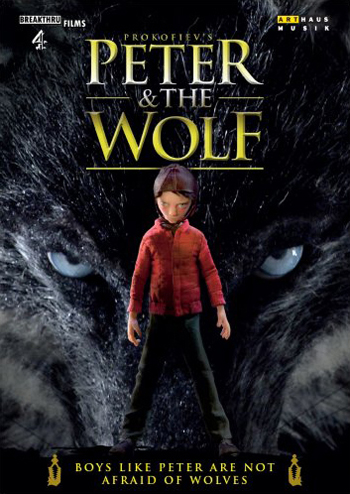 One of many adaptations

Peter and the Wolf (Пе́тя и волк in Russian) is a combination of children's story and musical composition by Russian composer Sergei Prokofiev. During performances, a narrator tells the story while accompanied by music played by an orchestra. Each character in the story is represented by a Leitmotif played on a unique instrument.

The story tells the tale of an encounter of a young boy named Peter with a wolf. The other characters are Peter's grandfather, a duck, a bird, a cat and an unspecified number of hunters.

The work has been recorded numerous times by many different orchestras, and has also been adapted to a variety of other media, including animation, stop-motion animation, theatre and ballet. It has also inspired many variants and parodies, some of which include different characters and instruments. The best known of these adaptations in Western media is probably the one from Disney's Make Mine Music (1946), which gives the animals and hunters names.