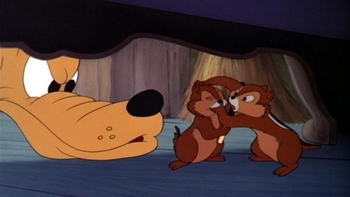 Squatter's Rights is a 1946 cartoon from Disney, directed by Jack Hannah.

It is the second appearance of the mischievous chipmunks Chip 'n Dale. Mickey Mouse takes Pluto to a rustic vacation cabin in the snowy forest. Apparently Mickey hasn't been there for a while, because Chip and Dale have made a home in the wood-burning stove. A terrified Chip and Dale blow out Mickey's matches when he tries to light a fire in the stove. This draws the attention of Pluto, and the latter portion of the cartoon is the war between Pluto and the wily chipmunks.