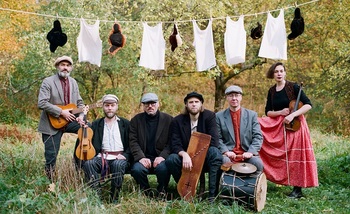 Otava Yo are a Russian folk rock band formed in the Leningrad/St Petersburg region in the early 2000's, specialising in reinterpreting old Russian ballads and folk songs, or else taking out-of-favour Soviet-era songs and reworking them for a post-Soviet Union age. To date they have released seven LP's and are developing a growing fanbase outside Russia. The band have also won plaudits for creative excellence in the production of videos for their keynote songs, winning Best Music Video awards at prestigious contests in the USA and Britain. The six note today in 2021, possibly seven core band members are multi-instrumental, most being able to play multiple instruments, and the band's sound is based on a combination of electric guitars, acoustic stringed and traditional Russian instruments. The group emerged from an older Russian folk collective called Reelroadb, augmented by instrumentalists who had learnt their craft as street buskers in Leningrad.