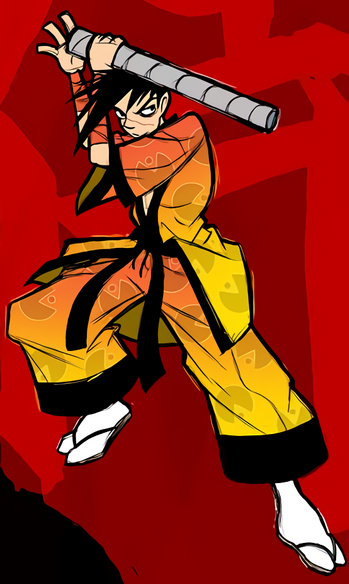 The tube is civilization!
"I am the foam of my sword.
Plastic is my body, and air is my blood.
I have ploinked over a thousand people.
Unknown to injury,
Nor known to realism.
Have withstood thumps to create soft weapons.
Yet, these hands will never hurt anything.
So as I play, UNLIMITED NERF WORKS."
Advertisement:

Any logically less-than-lethal weapon which ends up being otherwise just as effective as its "real" equivalent. This could happen because the setting of the story (or the censor) does not allow a character to carry a "real" weapon.

In video games with changeable/upgradeable weapons, a Nerf Arm may be the weakest version of the weapon, but the only difference between it and its stronger alternatives is (usually) the number of hits needed to defeat the enemies, or in some case, being Lethal Joke Weapon if used properly.

Note that there can be some Truth in Television at work; A spud gun may not be a mortar, but it sure isn't Nerf, either. Simply being non-lethal is no indication of safety.

See also Improbable Weapon User, Statistically Speaking, Cherry Tapping, This Banana is Armed. Closely related to—but not to be confused with—Nerf. Can overlap with Lethal Joke Character. A Subtrope is Wooden Katanas Are Even Better. Contrast As Lethal as It Needs to Be and Set Swords to "Stun". Compare The Man Makes the Weapon, where someone is skilled enough to use ordinary items to great effect.

Usually done for the funny factor, whether the players are laughing as hard as the programmers depends on your sense of humor.

Not to be confused with Numb Arm.