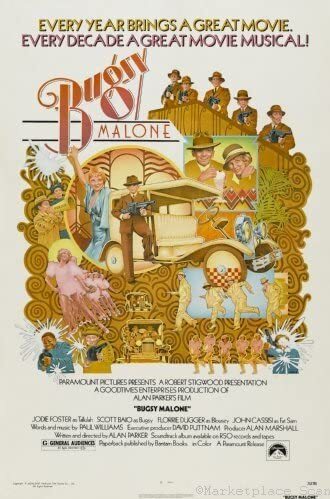 Don't let your babies grow up to be gangsters.
Advertisement:

A 1976 musical comedy film, written and directed by Alan Parker with a score by Paul Williams. The setting is a Gangsterland in The Roaring '20s — but all of the characters are played by children, and the weapons used are Edible Ammunition.

Dandy Dan's gang has a new weapon, the splurge gun. This means the custard pies used as weapons by their rivals, Fat Sam's gang, just won't cut it any more...

Bugsy Malone (Scott Baio), who is somewhat affiliated with Fat Sam but not an actual member of his gang, meets Blousey Brown, an aspiring singer who's trying to get work at Fat Sam's speakeasy. Unfortunately Fat Sam is too distracted by the "war" with Dandy Dan to give her an audition.

Dandy Dan's gang splurges most of Fat Sam's gang after a tip-off turns out to be a trap. Following this catastrophe, Fat Sam tells his right-hand man and only remaining gangster, Knuckles, that everything must continue as normal, eventually giving Blousey her audition, which she aces. However, right before the audition Tallulah (Jodie Foster), Fat Sam's moll, was flirting with Bugsy; although he rejected her advances, Blousey doesn't know this and gets angry with him.

Meanwhile Fat Sam hires Bugsy to drive him and his "specialist" Looney Burgonzie to ambush Dandy Dan at a meeting; it fails. Bugsy and Sam get away and Sam gives Bugsy extra money for his quick thinking.

Bugsy and Blousey make up and he reveals he has enough money for two tickets to Hollywood; however, as he returns the car he borrowed from Sam to the garage, he is mugged, losing the money. Leroy Smith saves him with what Bugsy calls some impressive punching. So, Bugsy takes Leroy to Cagey Joe's gym to see if he can make it as a boxer.

Sam once again enlists Bugsy's aid, offering him $400 this time, but Blousey is not happy to hear of the delay, and hangs up on him and she is angry with herself for thinking that she could trust Bugsy. Bugsy and Leroy then follow Dan's men to Dock 17, where they discover the guns are being stashed. The two of them can't take the place alone, so Bugsy and Leroy unwittingly find a large group of down-and-out workers who are having their free lunch and Bugsy persuades them to join him. They ambush the dock guards, steal the guns and make it back to the speakeasy in time to counter the attack by Dan's Gang. Chaos ensues until they are stopped by a chord from Razzamataz, the pianist. Everybody has been splurged (except Bugsy and Blousey), and the final song is about everyone realising they can be friends.

A Screen-to-Stage Adaptation premiered on London's West End in 1983, directed by Mickey Dolenz and featuring Catherine Zeta-Jones as Tallulah.

Specific to the stage version: