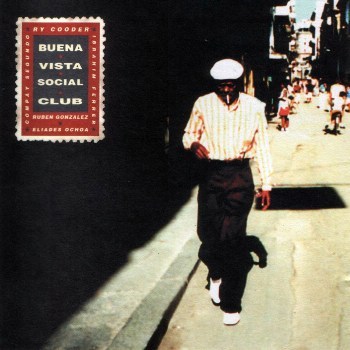 "In Havana, music isn't a pastime, it's a way of life."
Advertisement:

The Buena Vista Social Club is a Cuban music band who took their name from a musicians club in Havana, Cuba, that was popular in the 1940s until it closed in the 1960s. In 1996 many former musicians of this club reunited to perform traditional son, bolero, guajira and danzón music. The immediate cause for this reunion was American guitarist Ry Cooder, who visited the island around that time with the intention of recording a collaboration project between Malinese and Cuban musicians. When the Malinese musicians couldn't acquire visas to enter the country Cooder changed plans and recorded an album with the Cuban musicians instead. He played guitar on some of the tracks and also produced the record.

The Buena Vista Social Club was an incredible project because most of the Cuban musicians hadn't performed in decades and were old enough to be permanently retired. But they agreed to go back in the studio again and record in optimal circumstances. The consequent album, "Buena Vista Social Club" (1997) became an unexpected international bestseller, won a Grammy Award and brough the veteran musicians universal fame. For the first time since the Communist coup in 1959 the band members were allowed to leave the island to go on a world wide tour. In 2000 Wim Wenders directed a Rockumentary/Concert Film about them, which was nominated for an Academy Award and won Best Documentary at the European Film Awards.

Since many band members were in their senior years their superstardom was overwhelming but brief. Many passed away in the 2000s. The band still tours today with the remaining members and younger musicians falling in for them.

Has nothing to do with the Disney brand.