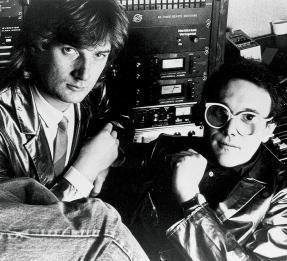 Geoff Downes (left) and Trevor Horn (right)
"I heard you on my wireless back in '52,
Lyin' awake intent on tuning in on you,
If I was young it didn't stop you coming through,
Oh-a oh-a"
— "Video Killed the Radio Star"
Advertisement:

The Buggles were a band from 1977 to 1982, recognized for the first video played on MTV, 1979's "Video Killed the Radio Star". Its members include Trevor Horn and Geoff Downes. Band friend and songwriter Bruce Woolley was also integral early on, co-writing "Video" and "Clean Clean". They released only two albums, The Age of Plastic in 1980 and Adventures in Modern Recording in 1981.

Riding high on the success of The Age of Plastic, the band were asked by their management to write for the band Yes, which culminated in Yes' 1980 album Drama including Horn and Downes as members. After Yes broke up in 1981, Horn released Adventures as a glorified solo act while Downes went on to form the Progressive Rock band Asia. Horn would become one of the music industry's most in-demand producers and helped shaped the characteristic sound of 1980s pop music as the mastermind behind ZTT Records and its signees, Frankie Goes to Hollywood, Propaganda, The Art of Noise and more, including Yes' 1983 comeback album, 90125.