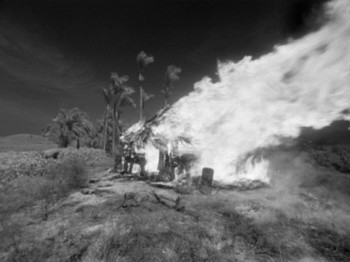 At least United Fruit won't get it.
Advertisement:

I Am Cuba (Soy Cuba) is a 1964 Soviet film set in Cuba, about life in Cuba in the days leading up to the revolution. It was directed by Mikhail Kalatozov (The Cranes Are Flying).

The film presents four vignettes of life in Cuba:

I Am Cuba was a Propaganda Piece meant to portray the cruelty of the capitalist Batista regime and to celebrate the revolution that swept Fidel Castro into power. As a socialist film, it was less than successful. Cubans did not care for the stereotypical portrayal of the Cuban people, and the Soviets felt that it was too arty and not ideological enough. (The Soviets also felt that the portrayal of life in Batista-era Havana might have seemed too much fun.) Consequently, the film was barely released in the USSR and Cuba in 1964, and was not seen at all in the West. Thirty years later it was Vindicated by History when it was re-released, and celebrated mainly for its jaw-dropping camera work that features many, many Epic Tracking Shots and swooping crane shots.