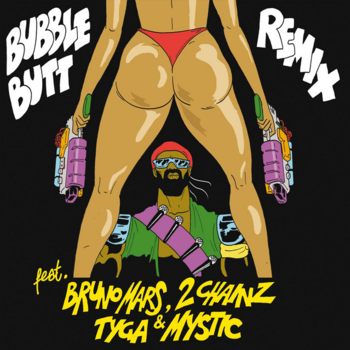 Bubble Butt is an electronic dance/hip hop song by Major Lazer and their fourth single from their album Free the Universe. It features Bruno Mars, Tyga and Mystic on vocals. It was Major Lazer's first commercial single to enter the Billboard Hot 100, topping out at number 56 and reached number eight on the Dance Club Songs chart. It was also a number one hit in Lebanon and South Korea.

But(t) just as, if not more famous than the song itself is its accompanying music video. A Fanservice-heavy, NSFW Mind Screw of a music video. But then again, what do you expect from Eric Wareheim of Tim & Eric fame?

It features three women with sea blue hair and makeup are listening to dolphin noises on their phones. That's when flying giantess named "Buttzilla" lands in front of their apartment building. Buttzilla then produces hoses from her mouth that inflate the women's butts, before she turns their appartment into a nightclub and throws a dance party. And that's just the start of the strangeness.

The video can be viewed here

, but keep in mind, it's probably NSFW.