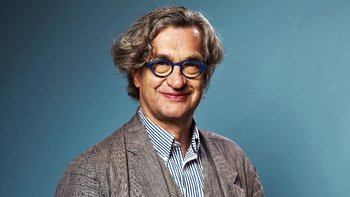 Along with Rainer Werner Fassbinder and Werner Herzog, Ernst Wilhelm Wim Wenders (14 August 1945), is one of the three major film-makers of the Neue Deutsche Kino movement, the West German version of the French New Wave which was, as Wenders points out in his writings, not really a new wave so much as a co-operative event of film-makers with mutual interests. All of them had different interests, different styles and had no real common program.

Wim Wenders was born in Düsseldorf and was raised Catholic (which makes his recent conversion to Lutheranism quite amusing). Like most German kids after World War II, Wenders was raised in a backdrop of troubled parents, bad memories and an influx of American popular culture. Wenders was hooked on to American cinema, rock music and comic books from a young age. In The '60s, he went to Paris hoping to be a painter, and got hooked on the French New Wave, the British Invasion and ironically, German Expressionism (Wenders noted that he saw all the Lang, Murnau, Pabst classics at the Cinematheque). He returned to Germany and enrolled at the University of Television and Film at Munich and started making a number of notable early films that are similar to the New Hollywood for their use of rock music as soundtrack (Wenders didn't pay rights so these films are still hard to see) and for the portrayal of disgruntled jaded youth who were quite Americanized in their love for jukeboxes, jeans and fast cars. Though his actual movies are more jaded and critical of his Americophilia. One character remarks, "The Americans have colonized our minds".

He attained prominence for his trilogy of Road Movie: Alice in the Cities (a 70s post-modern variation of Charlie Chaplin's The Kid), The Wrong Move (Wilhelm Meister's Apprenticeship updated to 70s West Germany) and Kings of the Road (a 3 hour buddy road-trip comedy). The films were quite impressive for its cinematography (by Robby Müller, who would later work with Jim Jarmusch), its portrayal of urban life and its mix of tones, part existential angst and part neo-German romanticism. In-between he started making documentaries, including Lightning Over Water (a film about director and mentor, Nicholas Ray). His most famous work comes The '80s: Paris, Texas which would go on to be one of the most influential films on American independent film-makers (as well as being Kurt Cobain's favorite films). He would end the decade with Wings of Desire which became a global success. Since then, Wenders' reputation has faded somewhat and critics argue that he peaked early in his career. His later features are not as well recieved and he has also made more documentaries than features, some of them such as the 2011, Pina shot in 3D, recieved his best notices yet.

Wenders collaborated often with the likes of writer Peter Handke, himself a movie buff and film director, and also associated with various rock bands many of whom appear in his films. Such as Chuck Berry, who appears in Alice in the Citiesnote As per Wenders, the film is an adaptation of the song Memphis Tennessee, Nick Cave and the Bad Seeds who appear in Wings of Desire and U2 who provided music, and the title song, for Until the End of the World, Faraway, So Close! and later The Million Dollar Hotel (''The Ground Beneath Her Feet!" from Salman Rushdie's eponymous novel).