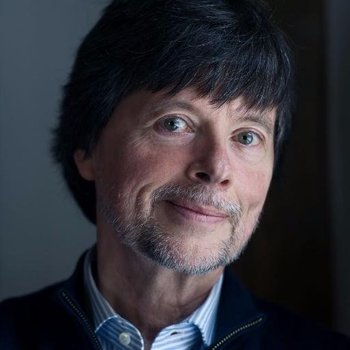 A portrait of the man just after having his head shaved.note Not counting the time it took for him to watch one of his own films.
"History isn't really about the past – settling old scores. It's about defining the present and who we are."
Advertisement:

His documentaries are known for their unique style, including a visual technique first made famous with The Civil War and now known as The Ken Burns Effect (though Burns himself has gone on record stating that he didn't actually invent the eponymous effect, crediting the National Film Board of Canada documentary City of Gold as his inspiration). He also employs distinctive musical scores, such as the upbeat string arrangements of The War or the folk waltz "Ashokan Farewell", which was played over twenty times during The Civil War (though it was first used in 1985's Huey Long). Among the well-known musicians who have contributed music to Burns' films are the likes of jazzman Wynton Marsalis, singer-songwriter Norah Jones, and Trent Reznor of Nine Inch Nails. His projects have also been able to attract some very esteemed actors to do voice over work, usually reading contemporary diaries and letters (The Civil War, for instance, featured Laurence Fishburne, Morgan Freeman, Julie Harris, Jeremy Irons, Jason Robards, and Sam Waterston among others, while other films have used heavyweights such as Tom Hanks and Meryl Streep). His go-to narrators have included notables such as David McCullough (The Civil War), Keith David (The War and Muhammad Ali), and Peter Coyote (most of Burns' films of the past decade or so). Another trademark is that a character will usually state their name and sometimes the year they wrote their thoughts. Burns has become well-known in the documentary world as a result, and many other filmmakers have emulated his style.

In later years Burns has collaborated with documentarian Lynn Novick, who has been producing his documentaries since Frank Lloyd Wright and was co-director with Burns of The War, The Vietnam War, and three episodes of Prohibition. Other frequent collaborators are historian and writer Geoffrey W. Ward (who has scripted many of Burns' documentaries as well as written their companion books) and Burns' own brother Ric, who has also made documentaries of his own in a style similar to his brother's, including "The Donner Party" episode of The American Experience.

Ken Burns also made a cameo in Gettysburg as a Union officer who asks General Hancock to get off his horse as Hancock rides along the line to inspire his terrified men.