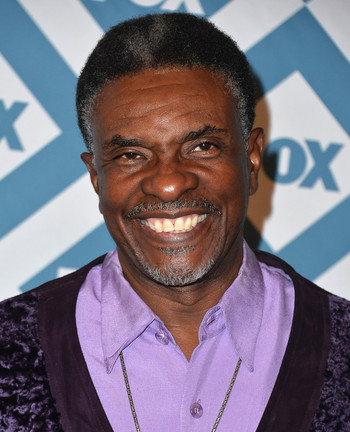 Frequently typecast as a Scary Black Man. Fortunately, he found his renaissance as a Voice Actor, from which he garnered a veritable army of devoted fans. Keith is best known in the voice acting sphere for his roles as Goliath in Gargoyles, Admiral Anderson in the Mass Effect trilogy, the Arbiter in the Halo franchise, and for Sergeant Foley in Modern Warfare 2 ("RAMIREZ! Take out that helicopter with a frisbee!"). In live action, he's best known for Childs in The Thing (1982), Frank Armitage in They Live!, and the affable soldier known as King in Oliver Stone’s Platoon.

He is not David Keith. What he is, is an awesome singer

Also, don't mess with his fries

As might be imagined, someone with his unique voice is often in demand as something other than an actor. Specifically, he makes an excellent narrator for such things as: