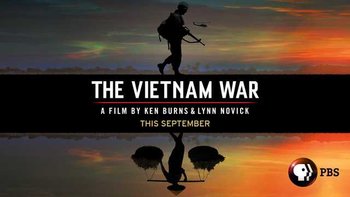 This 10-episode, 18-hour documentary series is a history of the entire conflict from the 1940s to the final North Vietnamese victory in 1975. The series starts in the 19th century with the French conquest of Indochina, making what are now the nations of Vietnam, Cambodia, and Laos a French colony. The French rule with cruelty and arrogance, turning the Vietnamese people against them—including an exile in Paris named Ho Chi Minh.

Ho Chi Minh leads an anti-colonial insurgency that after the end of World War II erupts into a full-scale war pitting the French against Ho's army, the Viet Minh. Nine years of bloody fighting ends with eventual French defeat and withdrawal, but the United States, determined to stop Ho from uniting Vietnam under communism, intervenes. America prevents unification of Vietnam in the 1950s and installs an anti-communist, pro-American regime in the south, leading to a second war before even a year has passed. Twenty more years of horrific combat pass before the United States withdraws in 1973 and South Vietnam is crushed by the North in 1975.

The series has a wide range of interviewees, from soldiers of the armies of the United States and North and South Vietnam, to Vietnamese civilians, to American and Vietnamese politicians and intelligence analysts.

This is not the first PBS documentary series to deal with the war, being preceded by 1983's well-received (and longer, clocking in at 13 episodes) Vietnam: A Television History. See also Last Days in Vietnam, a much shorter American Experience documentary film about the fall of Saigon and the end of the war in 1975 (another, earlier episode of the series dealt with the 1968 My Lai massacre), or Hearts and Minds, a shorter and much angrier film about the American war in Vietnam released in 1974, before the war ended.

Peter Coyote performs the narration. Trent Reznor and Atticus Ross composed over 90 minutes of original soundtrack for the project.