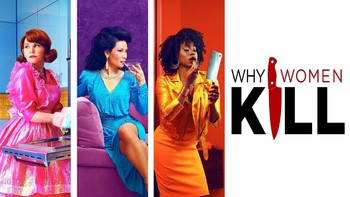 "L" is for the way you look at me...
"It's a simple question, really. Why would a woman kill? And who would she murder? The man who did her wrong? The other woman? Perhaps a friend guilty of betrayal? To know the answer, you must listen to the woman's story. Discover her secrets. Only then can you understand the choices she made. You might condemn her. You might forgive her. You might think you'd have done the exact same thing. But for the woman who kills, only one question really matters. Does she get away with it?"
Advertisement:

Season 1 focuses on three well-off and Happily Married women who live in different eras, but occupy the same Pasadena, California mansion and face a betrayal by their respective husbands, leading to a life being taken.

Why Women Kill premiered its first season on CBS All Access on August 15, 2019. The second season aired on June 3, 2021.A Character Sheet is now in progress.