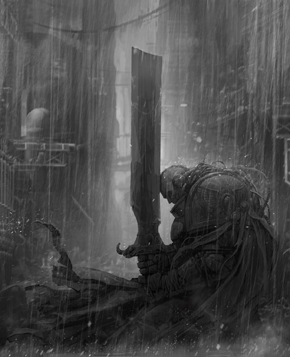 It's either the near future, the far future, or even the present, where there's a hopeless bleak war being fought, where even a major victory is just a hollow one. The population could be reduced to small numbers because of this endless war. In some cases the war could even be a stalemate for the two opposing factions resulting in severe casualties on both sides.

More often than not, the war might have been intended as a minor engagement before things went FUBAR, got complicated, and then went completely to hell, and now everybody is SOL. It's basically the war equivalent of Kick the Dog, Shoot the Dog and Shoot the Shaggy Dog... and of course War Is Hell. In this bleak situation there's bound to be Despair Event Horizon, I Did What I Had to Do, Black-and-Gray Morality, or Grey-and-Gray Morality. All for the sake of victory, but Was It Really Worth It? Beware bad writing, for it can turn this into prime fuel for Too Bleak, Stopped Caring.

A Forever War may eventually grind itself down to one of these.