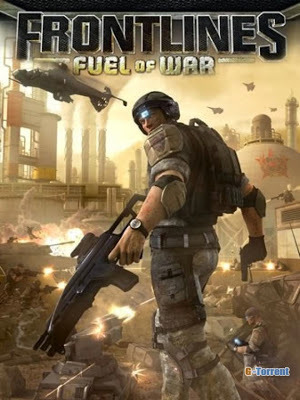 Frontlines: Fuel Of War is a First-Person Shooter developed by the now-defunt Kaos Studios and published by THQ on February 2008 for the Xbox 360 and PC.
Advertisement:

Set in the year 2024, after peak oil production. World War III is taking place. You are cast as a member of the Western Coalition 125th Strike Division, the "Stray Dogs". The game mostly takes place in the former Soviet Union, though the Chinese are present as hostiles. You start in Turkmenistan, where the Red Star Alliance stages an ambush of a routine guard duty rotation. By the end, Russian nuclear weapons have been used on their own soil. You succeed where Hitler had failed, taking control of Moscow, forcing the Russians out of the war... Officially. The Chinese are still fighting, and partisan fighters, coupled with the harsh Russian winter, have usually been able to beat back any invader. It's obvious that the war is still ongoing.