Webcomic / Gone with the Blastwave 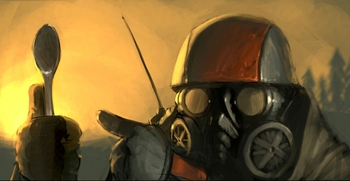 This.note Is a spoon.
"Because war can be boring too."
Advertisement:

Gone With The Blastwave

is a webcomic created by Kimmo Lemetti. It follows a group of soldiers fighting (for reasons they're more than a little hazy about) in a ruined city of a post-apocalyptic world. It "is not a very serious comic", having a lot of Black Comedy - the author advises you to "think of it as a some kind of a parody" of more serious post-apocalyptic settings.

It doesn't update very often at all, but not so much because of Schedule Slip as because the author has decided not to try for a schedule - it's a side-project, and the update arrangements are unashamedly on a "whenever-I-feel-like-it" basis.

Was on a hiatus for almost a year, returned with the author promising an update once a month, twice a month if the readers bribe him, then slipped back into hiatus with few sporadic strips since.