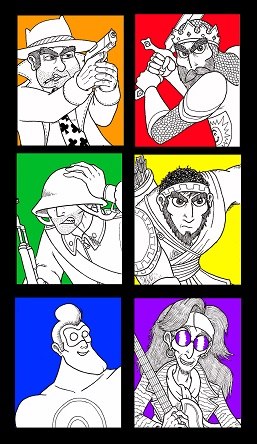 Our heroes.note From left to right: Detective Noir, King Arthur, Sarge, Heracles, Captain Obvious and the Guitar Hero.
Sarge: "So, you want us to ''go to Hell''?"
Azrael: "Exactly."
Advertisement:

Archangel Azrael summons together six very different heroes: Detective Noir, a drunk, chain-smoking private detective; King Arthur of Camelot, old and wise heir to the throne; Sarge, grizzled and shell-shocked war veteran; Heracles, the mythical Greek Demigod; Captain Obvious, your friendly neighborhood superhero; and Guitar Hero, a middle-aged junkie rock star. Azrael has a task for our heroes: Ominous dark powers are slowly corrupting the world. So our six heroes must journey to Hell to find out the source of the darkness. But first they would have to learn to get along...

Hero Material is notable for that it takes it cliche'd premise and parodies the hell out of it. During their quest to save the world that probably causes more destruction than they manage to prevent none of the characters learn anything or become a better person. At best they just sort of tolerate each other because they have to.

The sequel, titled "Hero Material 2", was announced on official HM facebook page in April, 2013, and the first part saw the light of day about a year later in April 25th, 2014.

in English, and for original Finnish version, go here