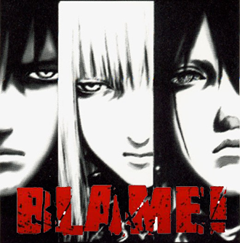 The story follows Killy, a silent loner possessing an incredibly powerful gun known as a Graviton Beam Emitter, as he wanders an immeasurably vast technological world known as "The City". The City is inhabited by scattered human and transhuman tribes, as well as hostile cyborgs known as Silicon Creatures.

Killy's primary goal is to recover the Net Terminal Genes, an extremely rare genetic marker that allows humans to access the Net Sphere, and gain control of The City's network. Doing so would allow him to halt the unhindered, chaotic expansion of The City, as well as stop the murderous horde known as The Safeguard from destroying what remains of humanity... or more correctly all humans who lack Net Terminal Genes (which is essentially all humans).

This story has a prequel, NOiSE, and a followup anthology called Blame Academy! And So On containing two short sequel chapters: Net Sphere Engineer and Blame!2; as well as a three chapter spin off manga, featuring all the characters of Blame! in...high school? That's right Blame! Academy — Adventure-student Killy in the Cyber school quest! Tsutomu Nihei is obviously even more insane than we gave him credit for.

A short six episode Web-Anime series adaptation was created by Group TAC in 2003. The manga received another anime adaptation in the form of a cel-shaded CGI film called Blame produced by Polygon Pictures (who also adapted Nihei's Knights of Sidonia) and has been licenced by Netflix. You can watch the first trailer here

Blame! provides examples of the following: