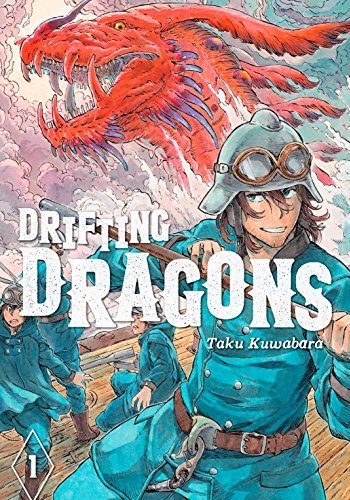 "Return to the clouds, and ride upon fair winds once more..."
Advertisement:

Drifting Dragons (空挺ドラゴンズ , Kuutei Dragons), is a manga written and drawn by Taku Kuwabara, which began serialization in good! Afternoon in 2016. An anime adaptation by Polygon Pictures aired in the Winter 2020 season, followed by international distribution from Netflix on April 30, 2020.

The airship Queen Zaza is one of the last of its kind. With no port to call home, she drifts through the skies, chasing shadows in the clouds, in search of a most lucrative prey: dragons. A single dragon, caught and butchered, can fill the bank accounts (and more importantly, the stomachs) of the Queen Zaza's crew. A single missed catch could mean financial ruin and dry, flavorless rations.