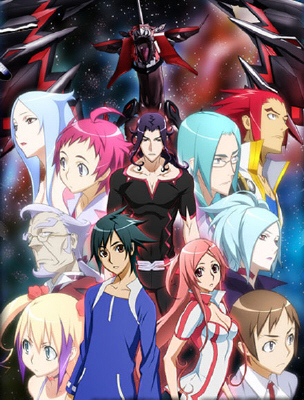 Jin Kamishima is going to go on a journey to the stars with his family, until the rocket is caught in a sudden accident. Only Jin is saved. Several years later, he meets up with a mysterious girl named Toa and finds himself getting involved into the actions of International Solarsystem Development Agency, or ISDA, and their unit called the Dragonauts. These Dragonauts, by forming a bonding with one of the dragon eggs that appeared on Earth in a ceremony called the Resonance, gain both a friend and a pilot to fight against the planet of Thanatos that has mysteriously appeared. Jin and Toa, along with newly born dragon Gio, find themselves involved in this.

No, it is NOT affiliated with The World of Darkness, no matter how much the title looks like it.

Dragonaut: The Resonance provides examples of: