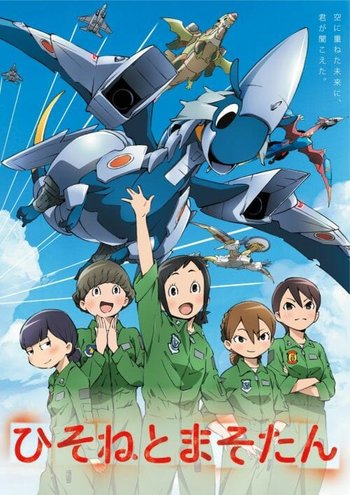 Hisone Amakasu has always been a little too honest. Fresh out of high school, she decides to join the Japanese Air Self-Defense Force in hopes of distancing herself from others, keeping them away from her sharp tongue. But of course, this position comes with its own problems, such as sudden errands assigned to her by her superior, or the gigantic dragon in the hangar that decides to eat her.

As Hisone's commander helpfully explains (after she's been safely puked out), that dragon is actually an "Organic Transformed Flyer," one of a race of legendary dragons who have only allied themselves to a select few groups of humans. The strength of the dragons have made them targets by other humans, so their human allies have disguised them throughout history, and presently, Japan's dragons are being disguised as fighter planes in the JASDF, who fight alongside specially selected "D-Pilots." And Hisone has just been selected.

Dragon Pilot: Hisone and Masotan is a 12 episode Spring 2018 original anime produced by Studio Bones. It is directed by Hiroshi Kobayashi (Kiznaiver) and written by Mari Okada (Ano Hana, The Anthem of the Heart), with Shinji Higuchi (Shin Godzilla) acting as executive director. Toshinao Aoki is responsible for the original character designs, Yoshiyuki Ito serves as the animation character designer, and Taisei Iwasaki is serving as composer.

The series has been picked up by Netflix as an 'Original' and released worldwide on September 21, 2018. Their English page gives it the Market-Based Title "Dragon Pilot: Hisone and Masotan."