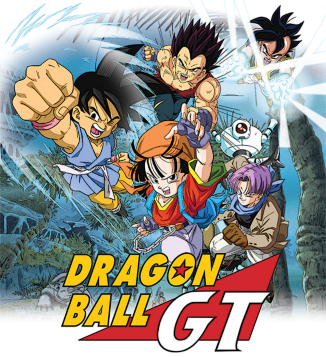 Step into the Grand Tour!
Advertisement:

Dragon Ball GT (with "GT" standing for "Grand Tour") is the anime-only continuation of the Dragon Ball series, originally broadcast from 1996 to 1997 in a single 64-episode season. Set five years after (10 years after, in the Funimation dub) the epilogue of Dragon Ball Z, Goku has finally finished training Uub and is ready to return home until an unexpected reunion with Emperor Pilaf and his minions who have managed to obtain the Black Star Dragon Balls, even more powerful than the originals. However, since failure has always been the only option for Pilaf's attempts to Take Over the World, he messes up the wish accidentally turning Goku into a child.

It is soon revealed that unlike their regular variants, the Black Star Dragon Balls scatter throughout the entire galaxy, and that if they aren't found within a year, the Earth will explode. And so, Goku heads out into space with Trunks and his granddaughter, Pan. Starts off with the trademark humor of the early parts of Dragon Ball, before rapidly returning to the more action oriented style of the previous series.

The series itself was less successful than the previous Dragon Ball or Dragon Ball Z and is polarizing among traditional fans. Unlike its predecessors, it didn't spawn any theatrical movies, but does have a largely-unrelated TV Special (known as Dragon Ball GT: A Hero's Legacy in the Funimation dub), that was generally better received than the series itself. The special tells the story of Goku's descendant, Goku Jr. The series' art direction was also carried over to the 25th-anniversary film Dragon Ball: The Path to Power, which loosely re-adapted the first third of the original manga.

The character sheet covering both this series and its predecessors can be found here.

Dragon Ball Super, the first Dragon Ball show covering new material since GT, doesn't acknowledge GT and contradicts it at several points. Though Super is not set after Z (it takes place after the Buu arc but before Z's Distant Finale), these contradictions are enough to bring GT's canonicity into question. There has yet to be an official statement about this though so GT's status remains an open question for now.

No relation to the Gran Turismo series or to The Grand Tour.

According to Dragon Ball GT: Final Bout on the PS1, he only needs his foot to defeat you.

According to Dragon Ball GT: Final Bout on the PS1, he only needs his foot to defeat you.