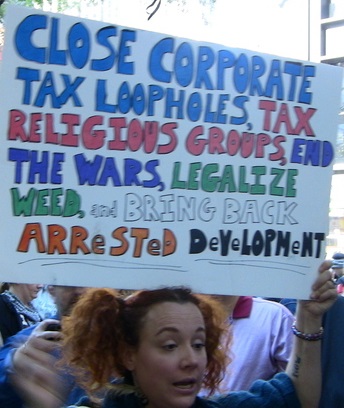 Three out of five ain't bad.
"Lincoln Sternn, you stand here accused of 12 counts of murder in the first degree, 14 counts of armed theft of Federation property, 22 counts of piracy in high space, 18 counts of fraud, 37 counts of rape... and one moving violation."
— Prosecutor, Heavy Metal
Advertisement:

See also: List of Transgressions, Arson, Murder, and Lifesaving, Felony Misdemeanor, Good News, Bad News, Odd Name Out, The Triple. Compare Poke the Poodle, Skewed Priorities, All Crimes Are Equal, Jaywalking Will Ruin Your Life, when the minor crime carries significant consequences, and Worst News Judgement Ever where jaywalking is the main headline over arson and murder. The inverse is Bread, Eggs, Milk, Squick, where a list of seemingly mundane things ends with something much darker. Clue, Evidence, and a Smoking Gun is a related inverse that deals with deductions rather than listing things. This can also overlap with Take That!, in cases where the speaker/writer is jokingly implying that the last item on the list is equally as horrible (or even more so) as the serious bad things earlier in the list. Sub-Trope of The Last of These Is Not Like the Others.

There Really Is A Bart?!

After Homer is institutionalized due to a misunderstanding, the diagnosing doctor is shocked to hear from Marge that 'Bart' isn't a figment of Homer's imagination, but rather their son.

Example of:
Real After All

There Really Is A Bart?!

After Homer is institutionalized due to a misunderstanding, the diagnosing doctor is shocked to hear from Marge that 'Bart' isn't a figment of Homer's imagination, but rather their son.