And a Diet Coke 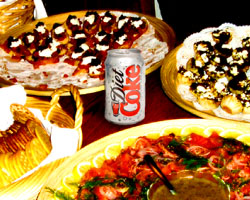 "I'm watching my weight."
"I'd like 20 tacos of grilled meat, some pozole with pork legs… oh, and a large diet soda, 'cause I want to lose weight!"
— "La Dieta", Mexican group La Fresa
Advertisement:

When a character (usually a Big Eater, scarfing junk food at an alarming rate), pauses to make one tiny concession to health. Bonus points if they act like this counterbalances the calories they've just consumed.

This is a standard comedic effect used in various media to emphasize the overindulgence that came before. In various talk shows that featured exceptionally obese people, they would often show a fast food customer ordering an exceptionally large meal including multiple sandwiches, fries and desserts, and concluding with, "and a Diet Coke.".

Despite being a staple joke on obesity and hypocrisy (especially the trusted "Americans are fatasses" routine), it happens in Real Life for various legitimate reasons. Diabetics may not be concerned about their intake of savories but must watch their sugar. Some people might also just prefer the taste of diet sodas. For instance, Diet Coke has its own distinct formula and tastes vastly different from regular Coca-Cola, and many people prefer it for being less sweet. Finally, even from the much-mocked calorie intake standpoint it actually does make sense — a 1,000-calorie gut bomb with a diet soda may be silly on its face, but it's still relatively better than a 1,200-calorie meal with a regular soft drink! A heavy soda drinker can see a tremendous benefit from cutting those calories, as soft drinks are the biggest source of sucrose and fructose in fast food. Also, unless the comedic effect stems from the juxtaposition of ordering large number of sugary foods and a sugar-free soda, a large meal with 'diet' drink is common among people working on muscle building, who tend to eat a lot of fats and proteins while limiting the intake of carbohydrates.

Related to Hypocritical Humor, and also overlaps with Arson, Murder, and Jaywalking. A specific example of the Perfect Solution Fallacy.