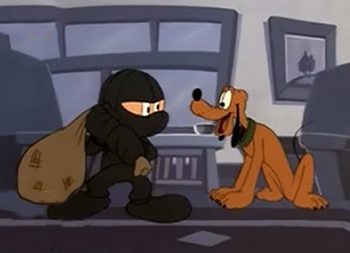 "...and finally Trigger, who's 'been-there, done-that' attitude has got the bad boys clamoring at her doorstep?"
— Narrator showing Trigger ignoring burglars breaking into her owner's home, The Grim Adventures of Billy & Mandy
Advertisement:

You pay for a clan of wild hyenas to prowl the gardens at night at your swanky crib to disembowl any intruder that tries getting in, only to see on the security cameras that they let the burglars in after a quick round of fetch and a belly-rub. Just can't find good help anymore, can you?

Often times the animal in question comes in one of two flavors. The first is that the animal tried being a vicious guard animal, but is physically incapable of accomplishing this, like a chihuahua or a pomeranian or a pet rock. The second kind (the more popular kind because it is more hilarious) is often an animal that should be intimidating - like a rabid wolf-hybrid doberman, a Bengal tiger or a megaladon in the castle moat - but it doesn't have a vicious bone in its body. It'll purr, rub against the intruding person, lick their face, maybe even roll-over wanting a belly-rub. It is just the cutest thing ever and it has no right to be. Go Fetch or Monster's Favorite Petting Spot may be used to demonstrate this.