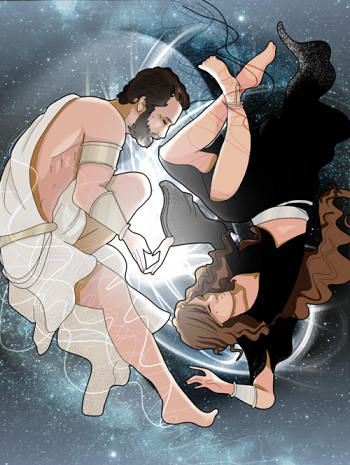 Chuck (God) and his sister Amara (the Darkness). Artwork

Suppose what your faith has said is essentially correct. Suppose there is a universal mind controlling everything, a God willing the behavior of every subatomic particle. Now, every particle has an anti-particle, its mirror image, its negative side. Maybe...this universal mind resides in the mirror image instead of in our universe as we wanted to believe. Maybe he's anti-God, bringing darkness instead of light...
—Professor Howard Birack, Prince of Darkness
Advertisement:

A Cosmic Entity that is roughly as powerful as the setting's monotheistic God — or, in non-monotheistic settings, the God of Gods equivalent — and is His antithesis. In other words, if God Is Good then the Anti-God will be evil, destructive, corrupting, and so on, and if God Is Evil, the Anti-God would be good, creative, nurturing, and the like. They are completely opposite of one another, but each one has an equally valid claim to the title of "Ruler of All." In stranger cases, this can also play into Blue-and-Orange Morality, where the prime God represents the Blue side and the Anti-God represents the Orange side (...or is it the other way around?). The relationship between the two may be one of harmony or of rivalry. A Balance Between Good and Evil may also be involved.

If only two gods exist, and both are antithetical opposites of each other, then the Anti-God is likely to be the God of Evil but this is not always the case. It's possible that the Anti-God is a God of Good and they may not be equal. Rough equality of power (or, alternatively, importance in the greater scheme of cosmic order) between the two opposite entities is mandatory at the minimum, thus why e.g. Morgoth/Melkor is not The Anti-God to Eru Ilúvatar despite being the God of Evil.

Several modern depictions of Satan elevate him from being merely the most powerful and/or influential of all demons/devils or Fallen Angels to this trope. Characters based on Satan are also portrayed this way. On the other hand, the Anti-God is sometimes portrayed as a separate entity from Satan, usually as his master and/or the one who corrupted him in the first place.

in Real Life, with bitheism being the "harmonious duality" type, ditheism denoting "eternal rivals" type, and "duotheism" denoting the situation where the two deities are of opposite genders.

Compare Satanic Archetype and Demiurge Archetype. May overlap with Destroyer Deity if their counterpart is The Maker.

Not to be confused with A God, I Am Not. See also The Antichrist for the Anti-God's version of the messiah.

Equal and opposite to Jubileus, Queen Sheba the ruler and creator of Inferno opposed to Jubileus' rule of Paradiso.

Equal and opposite to Jubileus, Queen Sheba the ruler and creator of Inferno opposed to Jubileus' rule of Paradiso.