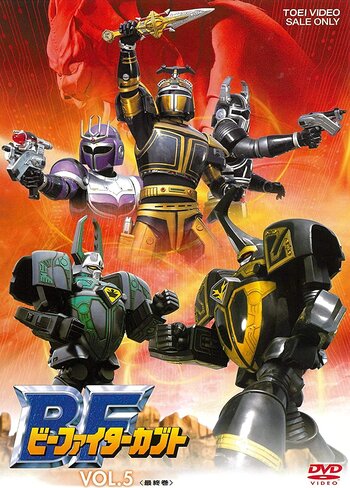 B-Fighter Kabuto is Toei's 15th entry in its Metal Heroes series, and the second of its B-Fighter series. Its footage was used to create Beetleborgs Metallix.
Advertisement:

Ten years after the Jamahl Empire fell, a new threat, the Melzard tribe, emerges. At the revamped Earth Academia called Cosmo Academia, Takuya Kai and Guru work on a new generation of Insect-Powered Powered Armor suits. When the Melzard launches their first attack, two of the suits are immediately entrusted to Kengo Tachibana and Ran Ayukawa. The third is soon entrusted to Ordinary High-School Student Kouhei Toba. With the new team in place, the Melzard's schemes for Earth have reached a dead end.

Our heroes are soon joined by: