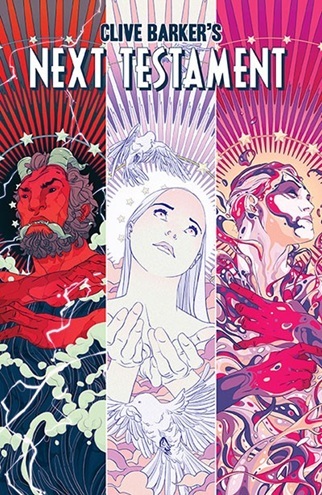 "I am Wick, the Father of Colors. I am the Lord your God. You have freed me from my prison."
Advertisement:

Well-known industrialist Julian Demond, who was known to be not too keen about religion, ends up finding himself on the path to finding God himself. However, God is not a bearded white man in a white robe. He's a living being made of multiple colors capable of levitating. And he doesn't call himself God. Instead, he calls himself Wick. And he claims several things, such as the invention of the English language and how the events in the Bible itself are pretty fictional. It doesn't take long for Julian to realize he's bitten off more than he can chew.

Meanwhile, Julian's son, Tristan, and his fiancée, Elspeth, soon find out what his father has gotten himself into and race to figure out how to stop Wick before the worst can happen.

This comic book miniseries contains examples of the following tropes: