Bright Is Not Good 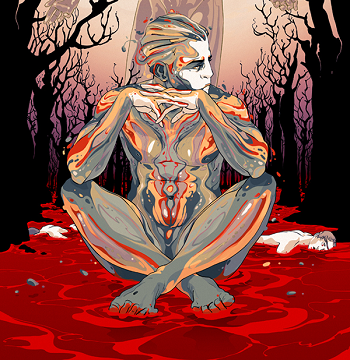 A Space Marine's armour is bright with heraldry that proclaims his devotion to his Chapter and the beloved Emperor of Mankind. Our principle is that what the enemy can see, he will soon learn to fear..."
— Warhammer 40,000

Generally, bright colors are used to create a jolly atmosphere or to show a character's extrovert personality. However, sometimes they can hide an unexpected threat. And you may notice it only when it's too late. Why? Probably because you were distracted by all those vivid colors.

Compare Light Is Not Good, contrast Dark Is Evil and Evil Is Not Well-Lit. Expect it to show up in a Stepford Suburbia, or even more probably in a Crapsaccharine World. Monster Clown is a typical character that fits this trope. Not related to smart and evil characters (you should look at Evil Genius or Wicked Cultured for this). For another kind of Bright Is Not Good, see Idiot Hero. Supertrope to Sickly Green Glow, the specific color family of yellowish green that indicates radioactivity, toxicity, acidity, or biohazard; and Hollywood Acid, again, typically a bright green or yellow.

No Real Life examples unless they're scientific ones, please. This is not a trope for petty grievances about a color being associated with a political party or a sport team you don't like. Also, it is not about the quality of a certain urban fantasy movie.