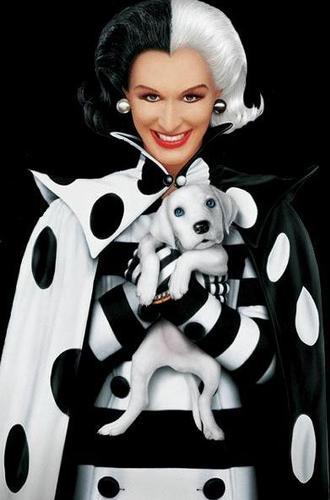 If she doesn't scare you, no evil thing will...

Gray is the queen of colors, because she makes everyone else look good.
—Helen Van Wyk

The gold standard of differentiating the heroes from the bad guys is making the heroes' color scheme sufficiently brighter and the villains' sufficiently darker. However, this ends up looking pretty bland. Sure, it's very intuitive, but still cliched and overused. However, the dichotomy of dark shades against solid white backdrops is striking and highly effective.

Cue this trope, where villains feature mostly black, white and gray color motifs, with at the most a dash of red here and there for effect. The heroes might occasionally wear black or white when this trope is in effect, but rarely at the same time or to a degree that exceeds the villains. The heroes will instead usually favor a more vibrant color scheme with fluid colors and a rainbow mix, to further contrast the villain's shaded motif.

What happens when Light Is Not Good and Dark Is Evil are combined. Contrast Primary-Color Champion and Secondary Color Nemesis.

The normally colorful Marc Anciel is akumatized into the black and white Reverser.

The normally colorful Marc Anciel is akumatized into the black and white Reverser.