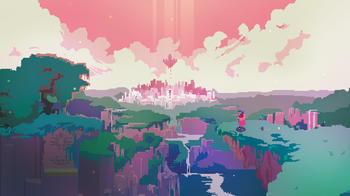 Soak it in.
Advertisement:

The protagonist is simply known as The Drifter, a lone wanderer with a Laser Blade and a drone to activate old-world objects. They explore a long-since ravaged world, in search of a cure for their debilitating disease that is slowly killing them. Despite the personal nature of the quest, their journey takes them to the far reaches of the continent, seeking the mysterious Modules that could lead them to the Immortal Cell, all while a mysterious monster continues to appear before the Drifter.

Gameplay is inspired by The Legend of Zelda and Dark Souls, and focuses on frantic yet precise combat and a whole heaping load of collectibles. The game is also Nintendo Hard, with combat and platforming challenges being unforgiving at times, but rewarding to players who master them.

Heart Machine have announced a Spiritual Successor, Solar Ash note  Originally titled Solar Ash Kingdom, with the last word dropped during development , which is set to release on PS5 on console and Epic Games Store on PC sometime in 2021. While taking inspiration from Hyper Light Drifter, Solar Ash is also dramatically different, being in full 3D and has a much more expansive story complete with voice acted dialogue.

for the Hyper Light Drifter Tabletop Role Playing Game in 2019. An animated adaptation was later announced on 28th March, 2019 and is currently in early planning stages.

The story of the Drifter and the world they're in is laden with symbolism yet sparse on concrete details, as there is very little text in the game beyond brief comments meant to help the player, so most tropes about characters and setting are up to interpretation.