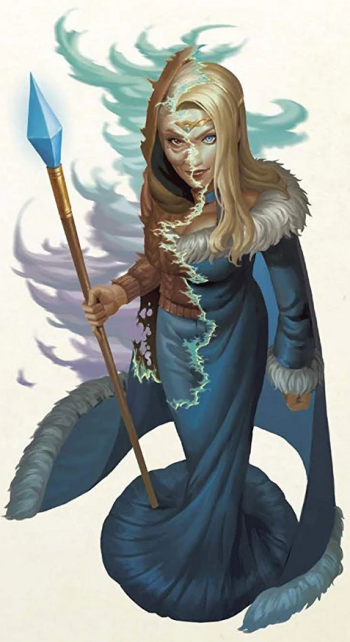 So, by studying magic or through being extraordinarily gifted genetically, you've managed to acquire the power to cast flashy destructive spells, brainwash people en masse, and pretty much bend the whole of reality to your will. What is the first thing you do?

Well... if you're a woman (or in more modern depictions, a man or a woman), the first thing you probably do is use your magic to make yourself look like a Vogue cover model. As villains tend to be defined by their vices, it's only natural then, that many villainesses and more than a few villains would gravitate towards vanity.

Until the 19th century, this had been predominantly a female trope, but this is no longer true: one of the most famous examples set in (relatively) modern times is a male, Dorian Gray from Oscar Wilde's famous novel.

Whereas the female variant is usually a witch using magic to keep herself young and beautiful (human sacrifices optional), the male variant is more often a sexy but bloodsucking ''bad boy'' vampire as first made famous with the Byronic Hero Lord Ruthven in John Polidori's 1819 "The Vampyre", which pioneered the male vampire as the Spear Counterpart to the Vain Sorceress.

While any sorceress who looks over 40 runs the risk of being ridiculed for her less than perfect looks, ancient-looking wizards, Warlocks, and male magic users are rarely subject to the same kind of ribbing. They will also be far less likely to fly off of the handle when called "Old man" or "Gramps", even when they have no grandchildren. Many of them may actually be trying to purposely cultivate the "wizened old man" look to inspire respect or get their enemies to underestimate them. It should be noted that some female characters do act this way as well, but they're going for the obvious smart-alecky hag gimmick, which only in recent years has become popular enough to be taken seriously.

The Vain Sorceress might just be a particular version of the rapidly-vanishing rule that in fantasy stories, all female main characters must appear youthful in appearance regardless of age. This is especially true for female mages who are associated with big strong virile warriors as their tanks; the difference between a good mage and the Vain Sorceress is only about 30% less clothing and 30% more purple dye.

The Vain Sorceress's youthfulness is often related to a specific power, where the character has to maintain their appearance by sucking energy from the young — if not be an outright vampire. Evil sorceresses tend to be far more obsessed with the perfection of their appearance and go to further lengths to maintain it than good ones will. They may even go so far as to pull a Grand Theft Me, stealing a younger, prettier body to act as the vessel for their soul. In any case, they have to be the Fairest of Them All... by any means necessary. If the Vain Sorceress can't achieve her desired beauty via her own power, she may bargain with a greater evil to receive it in exchange for services rendered.

If there's a Black Magician Girl in the hero's party, the Vain Sorceress will mock her unrefined, tomboyish look and intentionally flirt with the hero to make her mad. If there isn't, she'll mock the White Magician Girl's naivete. This again goes back to her vanity: the presence of other, younger females that spend most of their time with the good-looking heroic opposition means that putting them down and preserving her top spot is naturally a high priority.

Works that believe Vanity Is Feminine are just about guaranteed to have at least one Vain Sorceress running around; in such works, male characters who act this way are usually Sissy Villains.

Sometimes the Vain Sorceress is the Dark Magical Girl all grown up, so the heroine is the 'good' version. If the protagonist is a young male, this can venture into unintended Freudian overtones.

If the Vain Sorceress suffers from the Green-Eyed Monster, she often features as the Fairest of Them All. Usually delights in answering Revenge SVPs.

Note: this trope doesn't have anything to do with shapeshifting, deceptive illusion, or the more drastic physical changes that a male or female magic user may undergo in their campaign against an enemy. This is strictly a vanity thing. (It's interesting to note, however, how much prettier and more human-looking a female mage's monstrous forms are compared to those of a male mage.)

Contrast the Wicked Witch, who is equally villainous but lacks the beauty, and the Hot Witch, who has the beauty but lacks the obsession. If this person is also much older than they seem, then they are Really 700 Years Old. Such a villainess may be The Vamp, but the Vain Sorceress doesn't have to have the unchaste relationships or the overtly sexualized appearance that characterize that trope; rather, she may prefer and achieve the image of a beautiful Proper Lady. What defines this trope is the obsession with beauty, not necessarily with using it to seduce people. Compare Plastic Bitch, which uses 'artificial methods' (in this case plastic surgery) to enhance a vain and proud person's appearance.