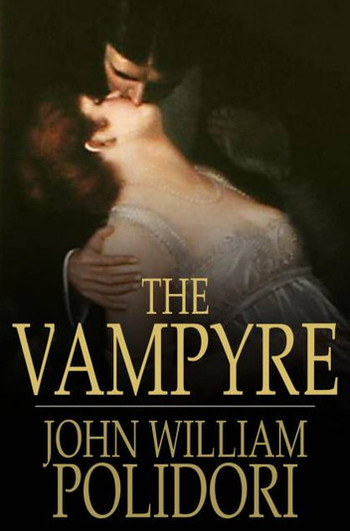 by John William Polidori, published in April 1819, was the first English prose vampire story and set off a craze of vampire fiction. It began as a fragment of a novel by Lord Byron and was adapted into a short story by Polidori, who had been Byron's personal physician. It was published by The New Monthly Magazine with an attribution to Lord Byron — probably on purpose for the sake of selling more copies, as the misattribution stuck long after both Polidori and Byron corrected it, much to the two's despair.
Advertisement:

The plot concerns Lord Ruthven,note In real life, a title belonging to a prominent Scottish family, among other things a nobleman, and Aubrey, his traveling companion. In Greece, Aubrey learns about vampires from a girl he falls in love with, who is later killed by one. Ruthven dies, and makes Aubrey swear not to tell anyone about his death for A Year and a Day. When Aubrey returns to England, however, he finds Ruthven alive and well, and courting his sister. Aubrey falls ill under the stress of keeping his oath. He dies shortly after revealing that Ruthven is a vampire, too late to save his sister.

As a matter of historical interest, Lord Byron wrote the fragment that Polidori would turn into The Vampyre while they were holed up in a villa on the shores of Lake Geneva whiling away the extremely unpleasant summer of 1816

with two of Lord Byron's other friends: Percy Bysshe Shelley and his wife, Mary Wollstonecraft Shelley. The latter produced Frankenstein on the same trip.

Has been adapted numerous times into plays, operas, and even a TV miniseries.