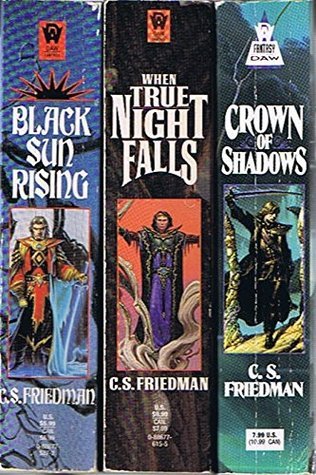 A trilogy of books by C.S. Friedman that successfully manages to combine the Science Fiction, Fantasy and Horror genres. The books' titles in order are Black Sun Rising, When True Night Falls, and Crown of Shadows. There is also a short story prequel, Dominion, which takes place about five hundred years before Black Sun Rising.

The story takes place on Erna, a planet colonized many centuries ago by humans who soon realized that a mysterious force originating from the planet, the fae, had the power to let their subconscious emotions such as their desires and especially their fear affect their environment and even create embodied creatures out of their nightmares. These creatures, called faeborn or in some cases demons, feed from humans, sometimes literally, sometimes in a more subtle way. They vary greatly in shape and strength. Some are literally gods that humans worship (and thus feed) in exchange for favours and help.

In return, some humans have managed to manipulate the fae to their need by using symbolism and the pattern of sacrifice, practicing Sorcery. Some humans, the Adepts, have even adapted to Erna to the point that they are born with the ability to perceive the fae and manipulate it instinctively.

The fae renders technology unreliable because people's fear affects its operation. As a result, the civilization of Erna has fallen down into a medieval level of technology. Some 1,000 years ago, some of the people who yearned for their Earth heritage created the Church. Based upon the writing of the Prophet, they hope that by garnering enough faith and mass symbolism to affect the fae on a macro scale they can manage to join/create the God of Earth and free themselves from the effect of the fae.

The story centers around the characters of Father Damien Kilcannon Vryce, a priest and warrior who also practices Healing sorcery, and Gerald Tarrant, the Neocount of Merentha, a mysterious Adept who allies himself with Damien Vryce for his own reason. Damien is seeking to kill demons to allow Ciani, the woman he's in a relationship with, to recover her memory and Adept abilities, sucked away by demons. Their quest will bring them to a deeper, more complex threat.

See Magister Trilogy for another of C.S. Friedman's work involving magic and the cost of using it.