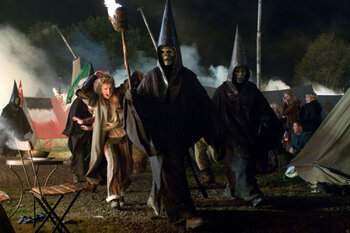 The wizarding community is currently under threat from an organisation calling itself The Death Eaters. Be Vigilant!
Advertisement:

In real life, terrorists have varying kinds of motivations and goals, as well as how and why they become groups. In Speculative Fiction, they vary even more greatly. But they share one thing in common: they work by spreading terror among people in order to reach a goal.

Fantastic terrorists may consist of "fantasy races" members, like werewolves, orcs, robots, superhumans, etc., especially when there's Fantastic Racism at work — and if that's the case, their goal could either be the equality of rights, or ruling over the others (likely by attempting to topple the local government or Kill All Humans). Dealing with a fantastic terrorist would be different from — and often worse than — regular ones. Might overlap with Anti-Human Alliance, if the multiple fantastic races are united against humans specifically.

In a(n inverted) variant, it might be an "anti-fantastic" terrorist instead, consisting of normal people in a fantastic society. They might be Absolute Xenophobes who are against the other race(s) for one reason or another (could be sympathetic or not, justified or not), committing Van Helsing Hate Crimes.

Despite existing in speculative fiction world for SF reasons, there might be veiled references to actual terrorism or real life terrorist groups.

Will overlap in many instances with Scary Dogmatic Aliens, the use of antagonistic aliens to depict thinly veiled Real Life ideologies. May overlap with Weird Historical War, if the trope is used in a real life historical setting. Compare Ghostapo and Stupid Jetpack Hitler for when the Nazis get to use fantastic or science fiction element(s) in their crusades. Not to be confused with terrorists being considered fantastic people, which falls under Your Terrorists Are Our Freedom Fighters. In case it isn't obvious, No Real Life Examples, Please!.