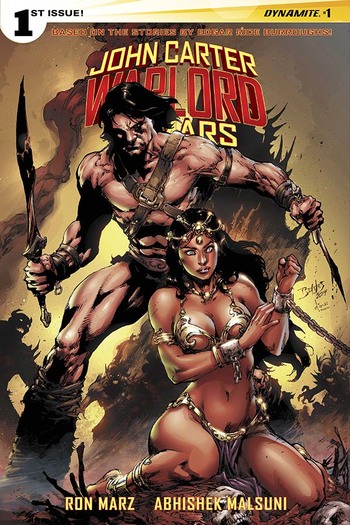 Warlord of Mars is the comic book adaptation of Edgar Rice Burroughs' John Carter of Mars book series, published by Dynamite Comics since October 2010. The comics told the story of Civil War veteran John Carter who ends up being mystically transported to the red planet of Mars. Not only is there sentient life in Barsoom (as Mars is called by its inhabitants), he discovers he is stronger and faster because of the planet's lighter gravity rendering his body much hardier. In this bizarre new world, Carter faces many adventures, falls in love with a beautiful Red Martian princess and faces arduous battles to win her hand and protect her, as well as his adoptive world.

The comics were notoriously faithful to its source material and among the most popular among Dynamite readers, given the time the first volume ran and the sheer number of spin-offs created from it. This was, in spite of an lawsuit that happened in the early 2012

when Edgar Rice Burroughs Inc., the family-owned company of John Carter's creator sued the publisher over trademark infringement, though the matters were amicably settled in 2014. Unusually, the lawsuit did very little to affect the comic's publishing over the course of its run, and after the issue was resolved, Dynamite and the ERB estate have worked together to relaunch the series in that same year.

The comics also created plenty of original content about the Barsoom mythos, most of which focusing on Carter's love interest Dejah Thoris, who received several spin-offs surrounding her as one can see in the list below, and became one of Dynamite's flagship characters, perhaps more so than the actual protagonist. The Barsoom comics are as follows.

This comics provides examples of: