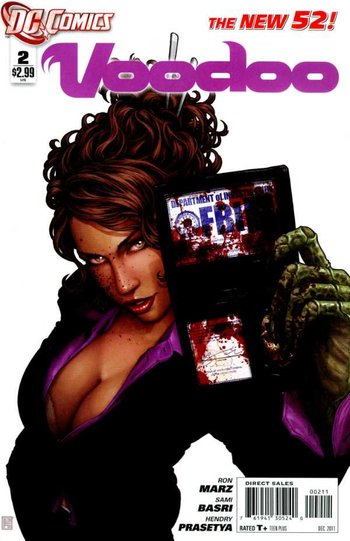 Not your daddy's Voodoo
Advertisement:

Voodoo was a short-lived series published by DC Comics as part of the New 52, written by Ron Marz and loosely based on the WildC.A.Ts character of the same name.

Sent to infiltrate Earth on behalf of the Daemonites, Priscilla Kitaen uses her telepathy and shapeshifting powers to gather intelligence on potential threats to her people, while working a day job as a stripper named Voodoo. However, after learning some secrets about her past, she begins to question her allegiance to the Daemonites.

While the series was notable for being the first New 52 series to feature a black female lead, poor sales led to a Retool at issue #5, and the series was cancelled after twelve issues.