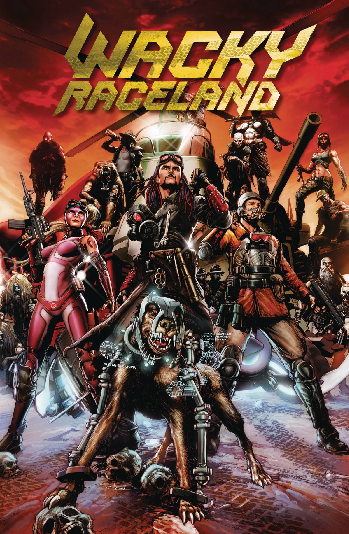 "Before there was the race, there were the racers; fighting, starving, killing, despairing. The post-apocalyptic world is a Darwinian crucible where warriors are either forged or consumed. I wait patiently for each individual's lowest moment, and then approach them with offers of utopia in exchange for the race. I am the Announcer, and this is my function."
— The Announcer
Advertisement:

Wacky Raceland is a comic book by DC Comics set in a messy, ugly, dangerous world where racers take part in deadly races. The competitors have been promised the last place on Earth where a human could thrive if they win. The others will be left to die in this dark Mad Max–inspired hell.

It was one of the first series announced to be part of the Hanna-Barbera Beyond initiative (and the first to be cancelled). Oh, and this is based on Wacky Races.