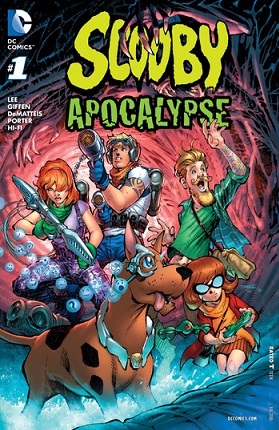 Scooby Apocalypse is a comic adaptation of Scooby-Doo, published by DC Comics as part of their Hanna-Barbera Beyond initiative. In this comic book series, the gang will have to survive in an apocalyptic world full of monsters who are hungry for human meat. This time, the monsters are real and very dangerous!

The series also contains a Secret Squirrel backup story in each issue, which ran until Issue #29. After that, it was replaced with a new one based on The Atom Ant Show.

In 2019, it was announced the series had been canceled and would end in April, rounding out at 36 issues after a three year run. Impressively, one of the longer lasting titles of the Hanna Barbera Beyond series.