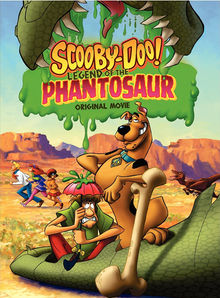 The sixteenth Scooby-Doo Direct to Video film. With Dinosaurs!

When it is discovered that Shaggy has a condition that causes a Heroic BSoD with every scare, the gang decides to take him somewhere relaxing, La Serena Spa, the least haunted town on Earth. Of course, it would be boring if nothing happened but relaxation, so a giant ghost dinosaur is thrown in to shake things up. This strikes Shaggy into one of his break downs, so Mr. Hubbley, the owner of the spa, decides to take matters into his own hands with a little bit of hypnotism. Every time Shaggy hears the keyword, he is filled with uncontrollable bravery. The only problem is, Mr. Hubbley forgets the keyword. And to make matters worse, Shaggy accidentally hears it and goes all out on a biker gang at a G-Rated Pub, and agrees to race their leader on a motorcycle down Dead Man's Curve.

Shaggy vs. The Bikers

While initially pathetic and cowardly against the bikers, the hypnosis turned him into a man capable of taking down an entire biker gang.

Shaggy vs. The Bikers

While initially pathetic and cowardly against the bikers, the hypnosis turned him into a man capable of taking down an entire biker gang.