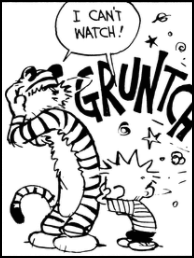 "What do you have, shit for brains? What a gullible idiot, I can't watch!"
— Diddy, Donkey Kong Country Abridged - Episode 1 - Big Dumb Day

Some things are just too horrible to look at. Maybe it's the guy next door plowing into your new car. Maybe it's your Love Interest falling to her death. Maybe it's your sister taking the last cookie from the plate. In any case, it's simply unbearable to watch, so you don't. Forcing someone to watch at this point is usually a Kick the Dog moment.

This gesture can take a number of different styles. Popular ones include looking away, closing your eyes, covering your eyes, ignoring a person who is physically unattractive or, for that extra dramatic punch, turning your back. Depending on the situation, you may also cover your ears to avoid hearing whatever it is.

This motion can be used to convey a number of different emotions. A person may use it out of fear if they are in terrible danger, or if a loved one is, or out of grief or disgust.

One of the most common subversions of this trope is for a character to cover their eyes, but peek through their fingers.

As you may guess, this can also be accompanied by the phrase, "I can't look!"

See also Ignoring by Singing. Compare Discretion Shot if the viewer doesn't see what the person is reacting to or Cover Innocent Eyes and Ears if they're keeping another person from seeing. Face Palm if the motion is in response to a Don't Look Back moment, where looking behind you is forbidden for a (often) potentially deadly reason.