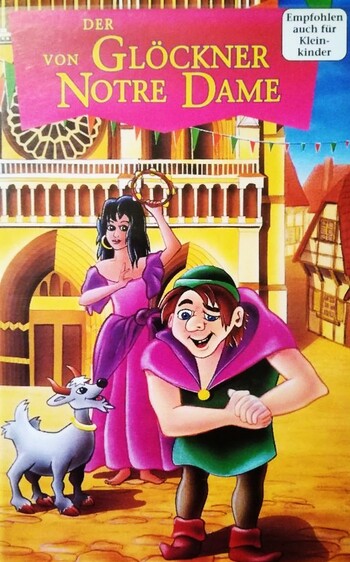 Der Glöckner von Notre Dame (The Hunchback of Notre Dame) is an animated film released in 1996 by Dingo Pictures. It is an adaptation of the famous novel of the same name by Victor Hugo.

One day in medieval Paris, France, a deformed baby is left on the doorstep of Notre Dame. The archdeacon of the church, Claude Frollo, adopts the baby and plans to raise him to see if he can be intelligent despite his deformities, naming him Quasimodo.

Somewhat interestingly, this take on the Hunchback story features a number of story elements from the original book often removed from other adaptations of the story. It's also one of Dingo's longest films, which is notable enough on its own. Like many other Dingo movies, it had a PlayStation release that included slide-puzzles and a color-fill paint feature.

"You is the trope of fools!"

Noodle Incident: A group of people briefly laugh about the previous years' Festival of Fools, but what they find funny is never explained.