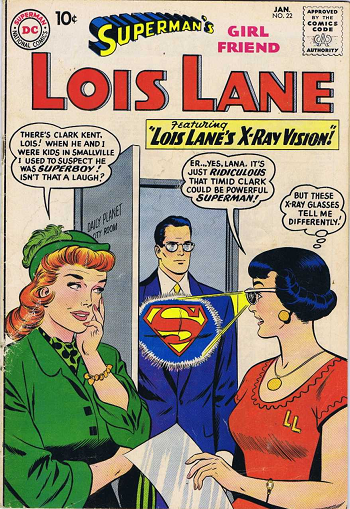 Superman's Girl Friend, Lois Lane is a DC Comics series that ran 137 issues from 1958 to 1974. Like the title says, it focus on the personal and professional exploits of Superman's lady love, Lois Lane, an Intrepid Reporter for the Daily Planet. The comic mixed women's issues and experiences of the time period with fantastical plots that come with dating the man from Krypton. Notably, at this point in comic book history, Loves My Alter Ego was in full force; while Lois loved Superman and occasionally tried to wrangle him into marrying her, she was not yet aware of his Secret Identity as her colleague Clark Kent, although she had her suspicions.

The series is also notable for debuting the Silver Age versions of Catwoman and Rose/Thorn.

Compare Superman's Pal Jimmy Olsen, which starred Lois's friend and coworker Jimmy Olsen; the two titles, along with Supergirl (1972), were later merged into Superman Family. Lois got another ongoing in 2019; for that, see Lois Lane.