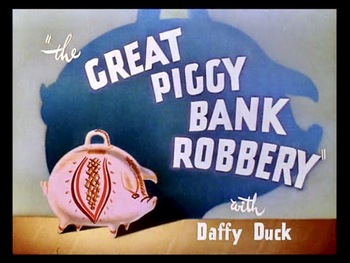 The central character of the cartoon is Daffy Duck. While reading his beloved Dick Tracy comic book, Daffy knocks himself out—upon which he enters a fantasy in which he is Duck Twacy, who has to investigate a conspicuous piggy bank robbery crime wave—if only because his own precious piggy bank was stolen.

What ensues is a very atmospheric parody of a typical detective movie, albeit peppered with typical mainstays of Bob Clampett's shorts, including strong emphasis on musical timing (timed to both the actions and the dialogue!), plenty of wordplay, dynamic background layouts, and some of the most bizarre, expressive animation displayed on the Silver Screen since the heydays of Fleischer Studios.

Suffice to say, this short is considered one of the finest entries in the Looney Tunes series, not to mention one of Daffy Duck's best star turns back when he was wacky, one of John Kricfalusi's favorite Bob Clampett shorts (the audio commentary for the DVD version of this short mentions that John K. watched this short at 22 and that's what inspired him to do Deranged Animation), and one of The 100 Greatest Looney Tunes.

When Cartoon Network launched in October 1992, this was the third cartoon to air.

Received a sequel, of sorts, on an episode of Tiny Toon Adventures, with Plucky playing the titular role. (It was made mainly to attempt to tie-in with the film adaptation with Warren Beatty) It's just as deranged as the short that inspired it.

After his piggy bank is stolen, Duck Twacy decides to call the famous detective... Duck Twacy. He holds a brief conversation before realizing that he had just answered his own phone call.

After his piggy bank is stolen, Duck Twacy decides to call the famous detective... Duck Twacy. He holds a brief conversation before realizing that he had just answered his own phone call.