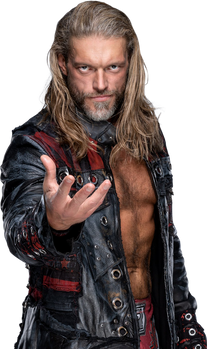 Adam Joseph Copeland (born October 30, 1973 in Orangeville, Ontario) is a Canadian actor and professional wrestler in the WWE under the name Edge. He was among their top talents (rivaling, if not surpassing, Triple H and Randy Orton as the most notorious heels of the first decade of the 2000s), and has many championship titles to his name: 4x WWE Champion, 7x World Heavyweight Champion, 5x Intercontinental Champion, WCW United States Champion, 12x World Tag Team Champion (7x with Christian, twice with Chris Benoit, once with Hulk Hogan, once with Randy Orton, and once with Chris Jericho), and 2x WWE Tag Team Champion (once with Rey Mysterio Jr. and once with Chris Jericho.) He also won King of the Ring in 2001, the Royal Rumble in 2010, and Money in the Bank in 2005. (He also won the Money in the Bank briefcase from Mr Kennedy in 2007.)

Edge gained notoriety in the WWE first as member of The Brood, along with Gangrel and Christian. Edge and Christian became one of the tag-team division's mainstays. In the latter half of the Attitude Era, he and Christian engaged in long-running feuds with the Dudley Boys and the Hardy Boyz; these feuds included several now-legendary Tables, Ladders, and Chairs matches. Edge eventually found singles success, especially after his victory in the first Money in the Bank Ladder Match, which brought him into the main event scene after he used the contract to win the WWE Championship from John Cena. He became known as the "Rated-R Superstar" after his real-life affair with WWE Diva Lita became a part of his on-screen persona. He was also nicknamed "The Ultimate Opportunist" due to his penchant for using any available means to steal title victories from his opponents.

His career ended in April 2011 following a successful defense of the World Heavyweight Championship at WrestleMania 27. In a surprise announcement on the following night's Raw, Edge revealed that a previous neck surgery had led to his spine deteriorating; he risked being paralyzed or killed if he continued to perform in the ring. Rather than risk his health, Edge retired from in-ring competition. He was inducted into the WWE Hall of Fame on March 31, 2012.

After retiring, Edge starting dating wrestler Beth Phoenix. They had two children before marrying in 2016 on Edge's 43rd birthday. After spending at least the latter months of 2019 denying rumors of a comeback, he made an appearance in the 2020 Royal Rumble, and confirmed that he is medically cleared to resume his wrestling career on the following night's RAW.

He also played as a recurring character on Syfy's Haven, as well as History Channel's Vikings and guest-starred on Sanctuary. He, along with Christian, also hosted the WWE Network Show The Edge and Christian Show That Totally Reeks of Awesomeness.

, but a quick note on how successful he was: during the course of his career, Edge racked up a total of 31 different WWE championship victories, more than any other wrestler in the history of the company - including 16-time world champions John Cena and Edge's fellow Hall of Famer Ric Flair.

This Edge is not to be confused with Edge, a video game, U2 guitarist The Edge, Final Fantasy IV's ninja prince, the knife-loving delinquent from Rival Schools, or the wielder of the Star Dragon Sword from Suikoden III.