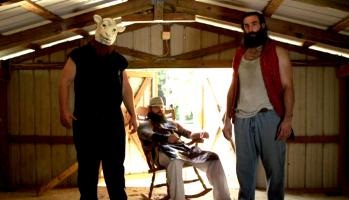 Catchin' fliiiiies... in his moooooouth... note L-R: Erick Rowan, Bray Wyatt, Luke Harper.
"I have no... followers. I only have brothers and sisters, all in the name of cause. People are sheep, you understand me? They can't lead themselves— they need to be led. People buy and sell fear. They worship war, they crave war, but I'm not afraid of their wars! I CREATED WAR! And I think it's time for the masses to wake up, wake up, WAKE UP! WAKE UP and look at this LIE they're living in! The world is deteriorating between their toes, and they do nothing about it. They only stand there. They whisper and wonder but never do anything about it! But I've seen it all in my dreams and in my thoughts, and above everything else I understand: this is not the beginning... it's the end.

The Wyatt Family was a professional wrestling stable formerly consisting of Bray Wyatt (real name Windham Rotunda), and his followers Luke Harper (real name Jon Huber), Erick Rowan (real name Joseph Ruud), and Braun Strowman (real name Adam Scherr). Their gimmick is somewhat hard to describe, but think of the hillbillies from Deliverance mixed with a creepy Charles Manson-esque cult. Wyatt himself has a bit of Max Cady from Cape Fear and the mannerisms of a Southern bayou preacher. They are a very dark, creepy bunch with an ominous presence enhanced by Wyatt's incredible mic skills and hypnotic charisma. They debuted on the July 8, 2013 edition of Monday Night Raw attacking Kane and injuring him. Since then, they have engaged in a number of feuds, including mid-late 2014 storylines with John Cena, The Usos and Chris Jericho.

In late 2014, after being absent for approximately two months, Bray Wyatt revealed, through pre-recorded vignettes, that Erick Rowan and Luke Harper had been "set free," effectively disbanding the group and sending all three into singles competition. Wyatt retained all the qualities of his entrance (the theme, lantern, "I'm here" pre-intro, and the rocking chair), and Rowan and Harper were given their own themes respectively. However, the family was later reunited in mid-late 2015, with Braun Strowman initially replacing Erick Rowan due to an injury until his return to the fold prior to Hell in a Cell 2015. Strowman left the stable in the summer of 2016 after the brand split. After feuding with the Family for some time, Orton forged an alliance with them and later became a full-time member.

While they are portrayed as heels, they won the fans over with their charisma and their unique gimmick. They are cheered often, and fans typically turn on their cell phone flashes and wave them as if they were lighters when they make their entrance for a match.

At TLC 2016, they became the WWE SmackDown Tag Team Champions; with Bray Wyatt and Randy Orton defeating Heath Slater and Rhyno. The reign wasn't extremely long, though; they would lose the titles to American Alpha on the last Smackdown of 2016. Orton won the 2017 Royal Rumble as a Wyatt Family member, while conspiring with Wyatt to kick Harper out of the group.

After Wyatt became the WWE Champion, Orton revealed his ruse to destroy the family, burning down Wyatt's house where Sister Abigail's ashes lay. The two collided at WrestleMania 33 with Randy coming out on top in a heavily-panned match. After the even more awful "House of Horrors match" at Payback 2017 the feud mercifully ended and Bray moved on.

The stable remains defunct and is unlikely to reform anytime soon due to three of the four primary members having other things on their plates and the fourth having passed away: