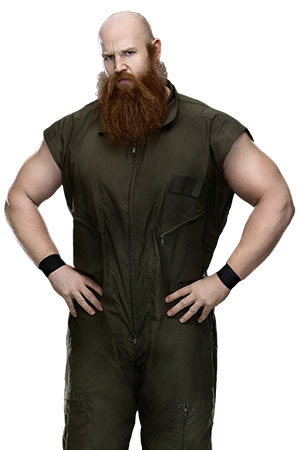 Without his mask
Advertisement:

Joseph Ruud (born November 28, 1981) is an American professional wrestler. He is best known for his time in WWE, where he performed under the ring name Erick Rowan. He is a former member of The Wyatt Family and is a one time NXT Tag Team Champion and a two-time Smackdown Tag Team Champion, first with his tag team partner, former fellow Wyatt Family member turned fellow Bludgeon Brother Luke Harper, then with Daniel Bryan.

Prior to being signed by WWE, Ruud competed in Japan, where he competed in both tag team and singles matches, albeit without much success. Following his tour in Japan, Ruud returned to the United States in 2008 and began competing under the ring name Thoruf Marius for the Minnesota-based F1rst Wrestling promotion.

In February 2011, Ruud signed a developmental contract with WWE and was assigned to their developmental territory Florida Championship Wrestling under the ring name Erick Rowan, where he debuted as a member of the Wyatt Family.

On September 29, vignettes were shown of Harper and Rowan being "set free" by Wyatt, marking the dissolution of the Wyatt Family and the transition of its members into singles competition. A short time later, Rowan turned face for the first time in his WWE career when he joined Team Cena with fellow former heels Dolph Ziggler and Ryback, going after his former Wyatt Family member and then-Intercontinental Champion Luke Harper, who had joined Team Authority.

Shortly after Wrestlemania Erick Rowan turned heel and rejoined with Luke Harper, teasing a potential feud with The Dudley Boys but Rowan was injured with torn biceps before that could happen.

Rowan made his return months later, rejoining The Wyatt Family on the Raw before Hell in a Cell 2015, helping Bray Wyatt and Braun Strowman to defeat Dean Ambrose and Roman Reigns in a handicap match. Later, he would join Luke Harper in the tag team "the Bludgeon Brothers" until they were both taken out by injury.

In 2019 he returned as the acolyte of Daniel Bryan.

His return was short-lived as he was released from his contract in Spring 2020. He returned to the indie circuit afterwards under the name "Erick Redbeard". His next major televised appearance would be at the AEW tribute show for his late brother-in-arms Brodie Lee (the former Luke Harper), making a run-in to save Alex Reynolds from interference by Wardlow. He made another brief appearance for the promotion again in 2022, joining Death Triangle for their match against the House Of Black on the Buy-In for Revolution.