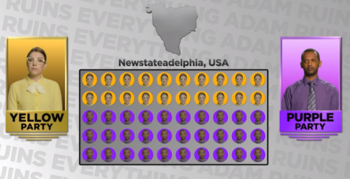 You don't want to get on the Yellow Party's bad side.
"Remember Terra Firma on Election Day because Terra Firma remembers you!"
— Charles Saracino, Mass Effect
Advertisement:

Political parties are a common occurrence to be found in just about any democracy. Individuals sharing similar ideologies and opinions band together to try and win elections and promote a political agenda that best serves the interests of people pertaining to that ideology and, if you're lucky, other people as well. Likewise, democracies in fictional works with prominent political themes will typically be comprised of such parties which reflect the issues and opinions which characterize the political climate of a story's setting.

Most often these are parties promoting only a single issue,

but the Fictional Political Party can be used in a variety of ways to enrich the political environment of a fictional world.

On one hand, this trope can be played seriously as it can be a reflection of a society's or certain people's attitudes towards the events or backstory that shape a narrative's setting; such examples may be viewed as a "realistic" political ideology that may exist had the extraordinary or fantastic events in the story's world been something that occurred in our own reality (and may not be all that different from Real Life party platforms and ideologies, after all).

On the flip side of the coin, the political parties in a work may be used to show that the democratic system in this society is incredibly flawed or a huge joke. Similarly, a fake party may be a stand-in to critique a Real Life political agenda or party, at which point such a group is likely to be used as a Strawman Political for an Author Tract. In other cases, the party itself may be based on ideas or concepts that are impossible (or pointless) to politicize in the democratic process, such as disorganized chaos or voter apathy, for the sake of comedy.

Occasionally, a story taking place in a Future setting may suggest that two or more Real Life political parties from the present day will have combined into a single party, for example, "The Republocrats." For added humor, combine two modern day parties with conflicting ideologies, like the "Traditional Progressive Party." Likewise, an Alternate History story may rewrite political history, suggesting that a party developed a similar yet different platform, compared to their actual counterpart, or even suggesting that major parties fizzled out while minor ones became big players long after they had disbanded in the real world.

See Also: No Party Given, Strawman Political, and A Nazi by Any Other Name.

The Demon, Orc and Succubus Parties wants you to vote for them.

The Demon, Orc and Succubus Parties wants you to vote for them.